Voodoo and I have had quite the ordeal over the past 18 hours.  I had been away Judging a trial with Dazzle for the weekend and Voodoo stayed with Mike.  They didn’t leave the house/yard all weekend. Mike said Voodoo was lethargic, but eating/drinking normally and stools were normal so we figured he might be a bit depressed about being left behind.

When I got home, he was still sedate and seemed to be hurting a bit when he was moving around.  He didn’t want to jump on anything (me, the couch, his brother, Mike’s lap) so I was concerned, but not super worried at that point.  I suspected it might be “Pano” a joint issues some puppies get that makes them sore, but that they grow out of. He had eaten his dinner as usual and stool was normal.  I stopped by my vet’s office and asked about it and he said I could give him a baby asprin for the pain and I got some joint support powder to add to his food.

The bigger issue of the evening, that happened shortly after the regular vet office closed (of course), was what I thought was a lost baby tooth that wouldn’t stop bleeding. He was dripping blood from his mouth and it wasn’t stopping after an hour, so I drove 40 min. to the care center in the late evening. I was thinking it might need to be cauterized to get the bleeding to stop or that maybe he was having a reaction to the one aspirin I gave him. By the time I got to the lobby, his mouth was clean and the bleeding stopped, so I opted to go back home rather than have them charge me a small fortune to look him over and tell me he was fine.

We got back home and about the time I finished my late dinner around 10pm, he started bleeding again, but this time it was a nose bleed. I knew that wasn’t at all right, so I rushed him to Medvet. He was still bleeding when we arrived at 11pm and the crate had a lot of blood in it. He was lethargic and clearly not feeling well at all, but still greeted the techs with a subdued wagging tail and wiggling body.  They took him back for vitals and then brought him to the waiting room I was in to wait for the Dr. (I was covering his eyes in the photo because of the bright lights and so he could sleep). 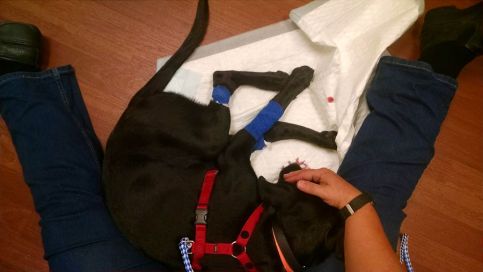 The Dr. recommended a full blood work panel and that’s what they did. I was completely shocked when she came back and said the most likely culprit was that Voodoo got into rat poison!  We have never bought rat poison and I know it has never been put out by us on our property. We are on a single lane dead end road (that looks like a driveway from the street) with only 3 houses on it, so anyone but us and the neighbor on the street is very rare. the rest of the property surrounding us (for many acres) is farm fields that are currently tall with corn.  One of the houses on our street belongs to a relative that I know has no rat poison out. Our other neighbor is an acre away and has small dogs that he lets run loose so I didn’t think he would put any out (which I confirmed today) and he said his relatives at the end of the street have cats and wouldn’t use it. When I let the vet know this, a few other possibilities were considered but quickly ruled out due to the blood work (clotting factors being way off being the biggest reason, but also his symptoms and age were considered to rule out other possibilities). So they took him back and started him on plasma and vitamin K.

I am very thankful it was a quiet night for them and other than a couple pets waiting for morning surgeries, he was their only active patient so he got excellent care and attention. And he won them all over immediately with his sweetness and adorableness 🙂 I was able to go back and sit with him a few times.  The first couple times, he was clearly quite sick and mostly slept after wagging his tail a bit when he first saw me.

About 4am, I was told he was finished with the plasma and initial Vitamin K dose and he was feeling better. When I went back, he was sitting in the crate and got excited to see me. He was telling me all about his ordeal in moans and groans and other “I’m ready to get out of here” noises as he got as close as he could to laying in my lap without getting out of the crate. They said they had taken him outside but he wouldn’t potty, so I asked if I could try.  He trotted down the hall with a wagging tail and wiggling body and I was SO happy to see that!!  He went potty for me and when he got back to his crate I said he had missed his late meal so the tech gave me a little tray/dish with a blob of bland canned food in it. He ate it in one quick gulp!  So he got a bit more and ate that with gusto too. While he felt he was ready to leave at that point, he was willing to settle back in the crate when I had to go back to the lobby so they could start his next IV drip. SO thankful for all the crate training we did so that being alone in the crate wasn’t stressful for him! 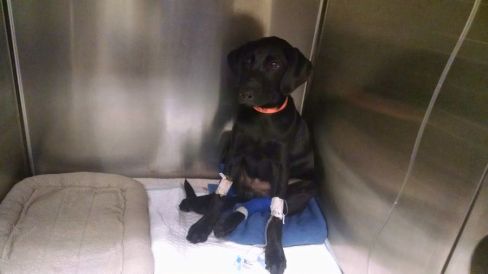 After I got back to the lobby, I was hungry so I went to IHOP to get breakfast at 5am then went right back to wait in the lobby awhile longer.  I got to go back again before the morning shift change to take him out to potty, let him eat more (off a spoon this time so he wouldn’t gulp it) and love on him awhile. He was still getting lots of fluids to help flush the poison. Given his fast turn around and all the other factors considered, rat poison was the only thing that really fit.  But I still have no idea how he could have gotten into any!

Around 9am, I saw a critical care specialist vet and she reiterated that rat poison was the most likely cause and said she wanted to do one more blood draw and send it to the lab to check his clotting factors and red blood cell counts. If that was all good, we could go home.  So as soon as he was finished with the blood draw they brought him to a waiting room where we took a short nap together while we waited for the results. Thankfully they came back good and his catheters were removed and then we just had to wait for the discharge papers and meds. 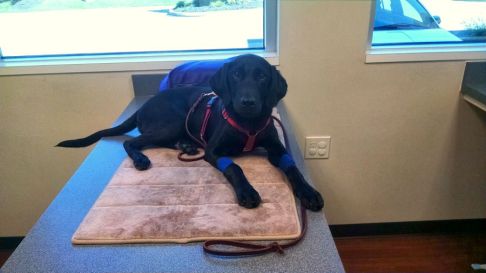 Almost exactly 12 hours after arriving at medvet, we were on our way home and once there, we both slept for several hours.  The vet said he shouldn’t have any lasting effects from the poisoning. Still need to figure out what has him so sore though.  Considering Pano, but also tick borne illnesses. We have a vet appointment tomorrow for follow up and will determine the best course of action then.

I’m very grateful to the staff at Medvet who took such excellent and loving care of him and to all my friends and family who were sending prayers and well wishes through the night as I posted the ongoing saga to facebook.