Voodoo tried his paw at CWAGS nose work on Wednesday night and got his first Q! He got the Q in the second trial. On the first trial, almost no one got it, even experienced dogs working on their ACE title that rarely NQ. So I’m not surprised he didn’t get that one.

We definitely have to work on his indication, because I think he found it in the first 4 sec. but he didn’t stay with it and then he got frustrated because he knew he found it but I didn’t read him correctly. And I was a bit shy in calling the find after the first NQ.

Since the trial on Wednesday, I have been down and out with a cold. Pretty sure I picked up the bug last weekend when a few people at the barn hunt trial were sick. I’m starting to feel a bit more human now though, thankfully.

The boys aren’t used to the inactive routine, but have been pretty good about chilling out when I ask them to do so. But now that it’s been 4 days, it’s getting harder and harder for them. This photo was taken on day 1. 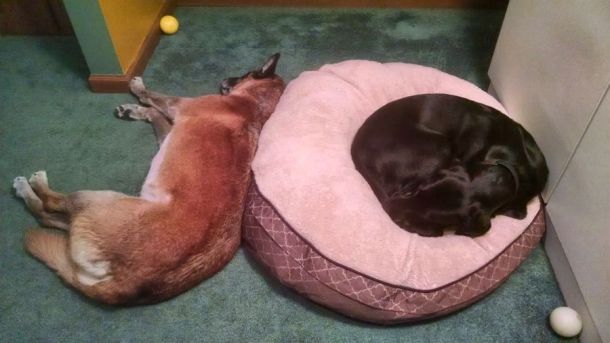