I feel like a slacker.  Compared to what I did with Dazzle when he was a pup, I haven’t done as much with Voodoo. But I haven’t NEEDED to do as much training! With Dazzle, he was non-stop energy.  Self-control and impulse control was NOT his strong suit 🙂 So the multiple training sessions per day were to save both our sanity.

Voodoo however, is much more laid back and has excellent self control and impulse control. We have worked on it, but he learns fast and he just has a much different temperament from a Malinois. Which is REALLY pleasant, I must say 🙂 But because he does have such a nice ability to settle and/or self-entertain I haven’t felt the need to be keeping him occupied 24/7. So we do little training sessions here and there whenever the need or desire arises, but I haven’t set up the camera to capture it. Most of what we are working on has been building the foundation behaviors, some of which I did capture and post.

The newest behavior I have been trying to teach him is to catch treats/toys that are tossed to him. He is making improvements, but I think his biggest stumbling block at the moment is just his age and lack of mouth/eye coordination. I’m sure in a few weeks he will be a catching maniac 🙂 He’s doing excellent in puppy class, way ahead of everyone, but it’s a great way for me to work on obedience behaviors in a highly distracting environment. And he gets a bit of time to play with the other pups. He and Dazzle are still playing like crazy and that helps keep him occupied and exercised.

Photo of the 4′ high barrier I put around the table with the cat food to keep Voodoo from another unplanned snack time.The cat can go in/out through the gate near the middle of the photo.  That is held open and kept from closing with a couple double ended snaps (not in the photo). While she’s not afraid of the dogs, she does like her new little safe haven 🙂

A few photos of our session with bubbles. In the first photo, I hadn’t planned for him to jump, but the bubble floated upwards and of course that was the one he wanted.  I cringed as I took it, but he landed safely and I got a great photo. He wasn’t so happy with the taste of them when he did catch them (shown in the last photo where he’s making a face after catching one). The session was cut short when I leaned down to get a better angle and dumped most of the bubble solution. 😦 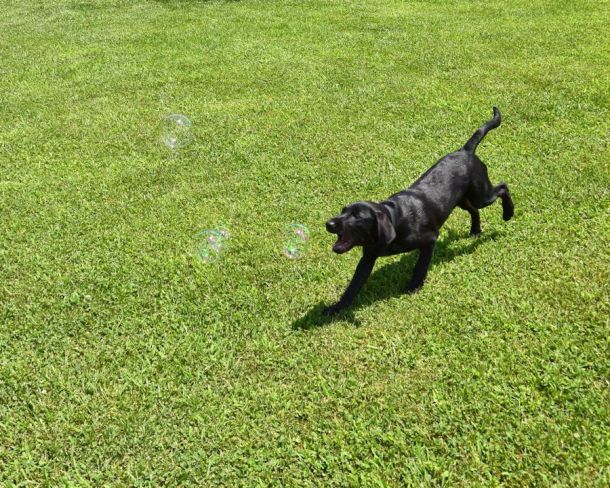 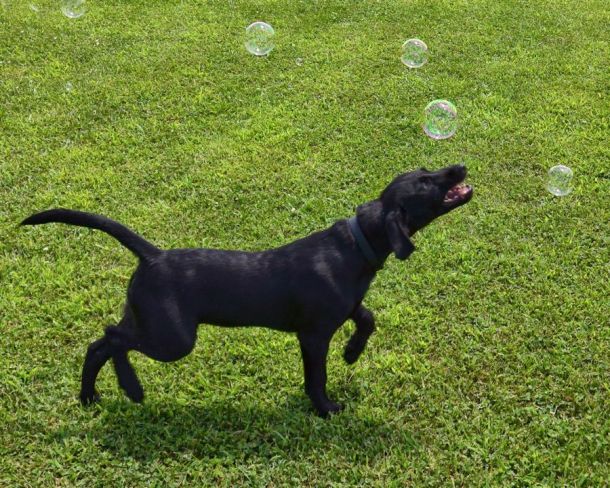 He is LOVING nail trim time with the remote control treat dispenser! He can’t wait to get up there with it to have his nails dremeled. Still doing pretty rapid fire treats as I file, but very gradually increasing the time between treats being dispensed when I hit the button.

This photo of him under the Jog-a-dog is the last photo I think I’ll get of him under that machine.  He went under a couple days ago and rolled over and got himself stuck under the lower part and started screaming because “the machine wouldn’t let him out”. He wasn’t hurt, just freaked out. He hasn’t squeezed under since then.

Last two photos are just for fun.  I was at my desk and heard him come in and sit next to me.  I looked down and he was patiently holding the big, heavy Galileo bone and waiting for me to trade it for a treat (which I did after I got the photo) 🙂  And the last one was where I finally captured a half way decent shot showing how he likes to wrap his front feet around the tug toy. This allows him to hang his full weight on it. I’m sure that will be fun when he’s 60 lbs! And sometimes he’s able to grab higher on the toy by quickly switching his grip to the part above his paws. 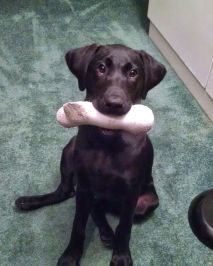