He did great at his first hotel stay!  I’m sure it helped that he had his ‘hotel pro’ brother there. He liked that he could get on the hotel bed himself. My bed at home is higher, which helps me get in and out, but he’s not able to jump on it himself-yet. His first night was after getting up at 7am and spending most of the day at the trial while I Judged. But since he spent most of that time sleeping in his crate, he and Dazzle were ready to play when we arrived at the hotel room. Thankfully they play quietly and I was done Judging by 3pm, so we got to the hotel fairly early.

After they played for awhile, then napped for awhile, I took them to Bob Evans to try Voodoo’s first sit-down meal in a restaurant. When the waitress says (at the end of the meal) “I didn’t know you had dogs under there!”  I’d say that was a success! But they take up a LOT of space. Not an issue when I’m by myself, but there wasn’t any leg room under the booth for anyone else.

Back at the hotel, they played a bit more and we went out for a potty walk where they found what seemed to be an entire colony of mice in the grass strip by the road. They both had a blast following trails and sticking their noses into the holes and breathing deeply for about a half hour. No mice were seen, but their scent trails were everywhere! we would have stayed there longer, but even though it was dark, it was still about 85 degrees with high enough humidity to feel like a sauna.

Back in the room, he went into his crate and slept silently till morning. Since I was only back up Judging that day, I didn’t have to get up at the crack of dawn and it was nice to have a relaxed morning.

The boys relaxing at the hotel:

Pretty snazzy for a Super 8! 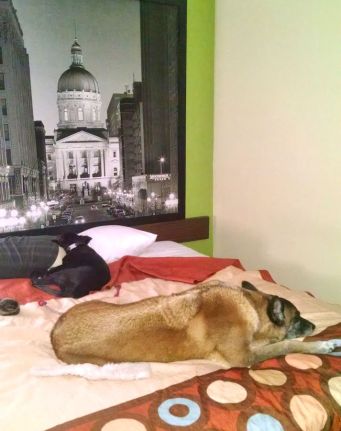 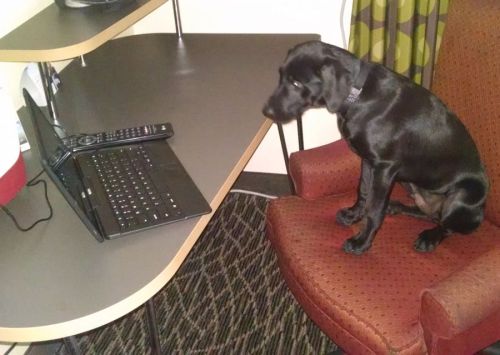 He may no longer fit on my desk at home, but when he got in my lap and saw the uncluttered, open expanse of “desk” he went right on up and sprawled out! Bonus: it was right in front of the A/C unit. 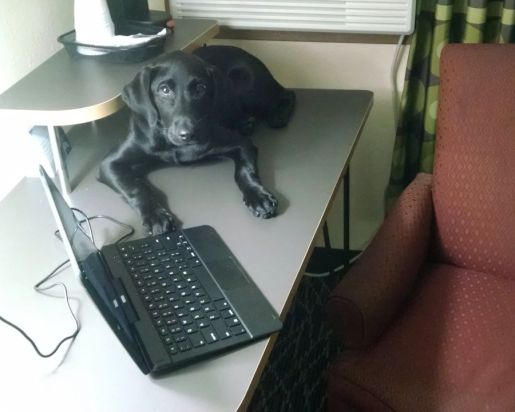 This is how he spent most of the time at the trial- sprawled in the crate, belly up. Thankfully he was quiet and relaxed, even when I was running Dazzle in the ring! 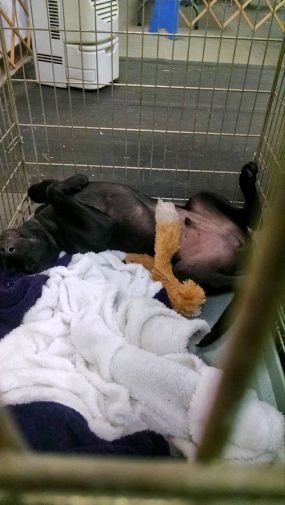 Saturday evening a group of us went out to dinner. I debated taking both dogs, but in the end I decided it would be better to just take Voodoo, so Dazzle stayed in his crate at the dog club (building was locked and A/C on). I only stayed at dinner about an hour and a half. For the first part, Voodoo was figidity. Then he settled down and took a short nap. Then he was ready to go and do something else (bored). But by then, we were done eating and ready to go back and get Dazzle and head to the hotel for the night. The restaurant was packed and busy. But overall he did really well with it!

Only issue was that when I got Dazzle, I forgot to get Voodoo’s folding crate! It was about 9:30 pm when I realized I didn’t have a crate for him to sleep in!  So, he also experienced his first night sleeping loose.  I did my best to “puppy proof” the room by tucking up all visible wires, picking up the trash can, closing the toilet, etc. and then just had to hope for the best.  After I went to bed and turned off the lights (about midnight) he started on the bed with me and Dazzle. But I could tell he was hot by the amount of flipping and flopping and complaint moaning  he was doing.  So then he went to the floor and tried several different places there (next to the bed, under the luggage rack, under the desk, under the chair, near the bathroom, etc.) but there apparently wasn’t a good spot on the floor either.  He tried a few different positions on the chair in the room, but that also wasn’t right for Goldilocks. So I got up and gave him a bully stick. He moved around the floor as he worked on that till about 2am when he finally got comfortable and sleepy. He jumped on the bed, dug around a bit, flopped down, let out a big sigh and finally went to sleep!  He was still in that spot when I got up in the morning. And he was relaxed and stretching out on the bed as I got dressed to take him out. So a big success! But he still sleeps in his crate at home 🙂