Update: added a photo at the end of this post.

While I had a forced month off from offering Barn Hunt training to others due to my rats being in quarantine (thankfully found clear of the potential virus outbreak) I signed Voodoo up for a month of swimming at a heated indoor saltwater pool that is less than an hour from me. We went down there a few times a week, mostly for him to just swim, but also to practice beginning dock diving stuff and some auto finishes on his retrieve.

Voodoo had a BLAST at the indoor heated pool today! Now that he’s 10 mo. old, I wanted to get him started on the baby dock diving stuff.

He was invited into the pool a bit early because the puppy ahead of him was hesitant to go in the water and it was hoped that seeing him in the water would help give her confidence. Not sure it helped her, but Voodoo was loving it so much! Right after I bought him on the dock, he did a quick sniff of the puppy and then ran down the ramp into the water! I wasn’t sure if I was going to be able to get him to come out of the pool! He just swam and swam and switched from one toy to the next.

But when the other pup left and I picked up a toy, he was willing to come out so he could go back in after the tossed toy. The extra toys were cleaned out of the pool and I was able to start with him getting the toy from my hand off the ramp. He did that no problem and I started raising it up a bit so he would have to do a small push off.

Then I went to the ledge at the end of the pool and tried the same thing, but he stopped at the edge and jumped in without going for the toy. I was happy he was willing to jump in and praised that a lot, but it didn’t get him the toy. So then I held the toy just barely out of his reach, hoping he would do a tiny jump for it. He tried hard and I’m not sure how he held onto the edge at times, but then he got frustrated. So I went back to working on the ramp for a few reps.

When we came back to the end of the pool, I let him get the toy I was holding just out of reach a couple times even though he didn’t go in. I just wanted him to be successful. Then I started him back a few paces and had him follow the toy to the edge, keeping the toy just barely out of reach. He grabbed for it and went in! He lost his grip on the toy, but he did it! Unfortunately, the person there that I had asked to video before wasn’t on the dock so I didn’t get it on video. That’s when I set my phone on the chair and propped it up with a toy (the black thing partially blocking part of the screen). I was hoping to catch the same thing, but he jumped right off after the toy! He didn’t always grab it from my hand, but he was getting the idea!

The slow-mo clip at the end was his final jump of the session taken by the person that works there. In between most of the jumps he got to play tug on the toy.

I’m thrilled with his progress and looking forward to more visits!

More dock diving practice. I eliminated the run up and I like the results. As long as I don’t anticipate!! Only did 6 of these then let him swim and retrieve from the ramp entrance. https://vimeo.com/201954063 I bought a rubber mat after today’s session that has deep grooves in it that should eliminate all slipping. If the dock is just wet, it retains great grip. But with fast reps, the water doesn’t have time to all drain and when a puddle forms, it gets more slippery for him. I know the mat will eliminate that issue.

How to blow a retriever’s mind 🙂 Rather than fetching one toy at a time, I had him stay and then threw a whole handful of toys in the pool! He had such a hard time picking which one to bring me! LOL I found that I had to let him get them all and then repeat the process. If I tossed in a toy he had already gotten, he would just keep bringing that one 🙂 https://vimeo.com/202129729

Voodoo likes the blow dryer at the dog pool 🙂 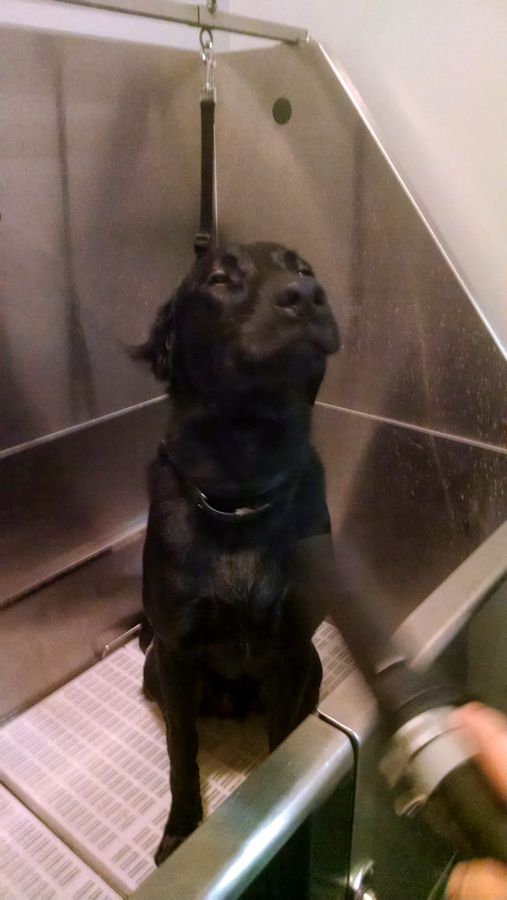 Today, Voodoo was so excited to get to the pool that he JUMPED OVER the 4′ high “door” to the ramp that leads up to the pool! No hesitation at all. Happened so fast I couldn’t do anything to stop him. He will be going all the way to the pool gate ON LEASH from now on. At least he landed on the ramp, so it wasn’t a full 4′ drop. But still way higher than I want him jumping right now!

Practicing “fetch to heel” for field work. I’m cuing this as he is coming toward me and hopeful he will be able to tell the difference between this “auto heel” retrieve for field work and “retrieve to front” for obedience. https://vimeo.com/205606351

Forgot to add this photo. Tried to get an action shot for the “capture movement” challenge, but it was just too dark and he was moving too fast to get a good shot indoors. But this is how he jumped when I put him on a stay, tossed in his toy and released him to get it. 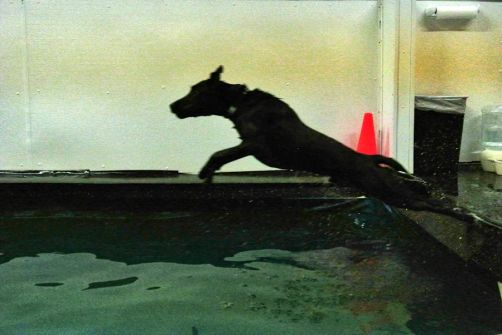